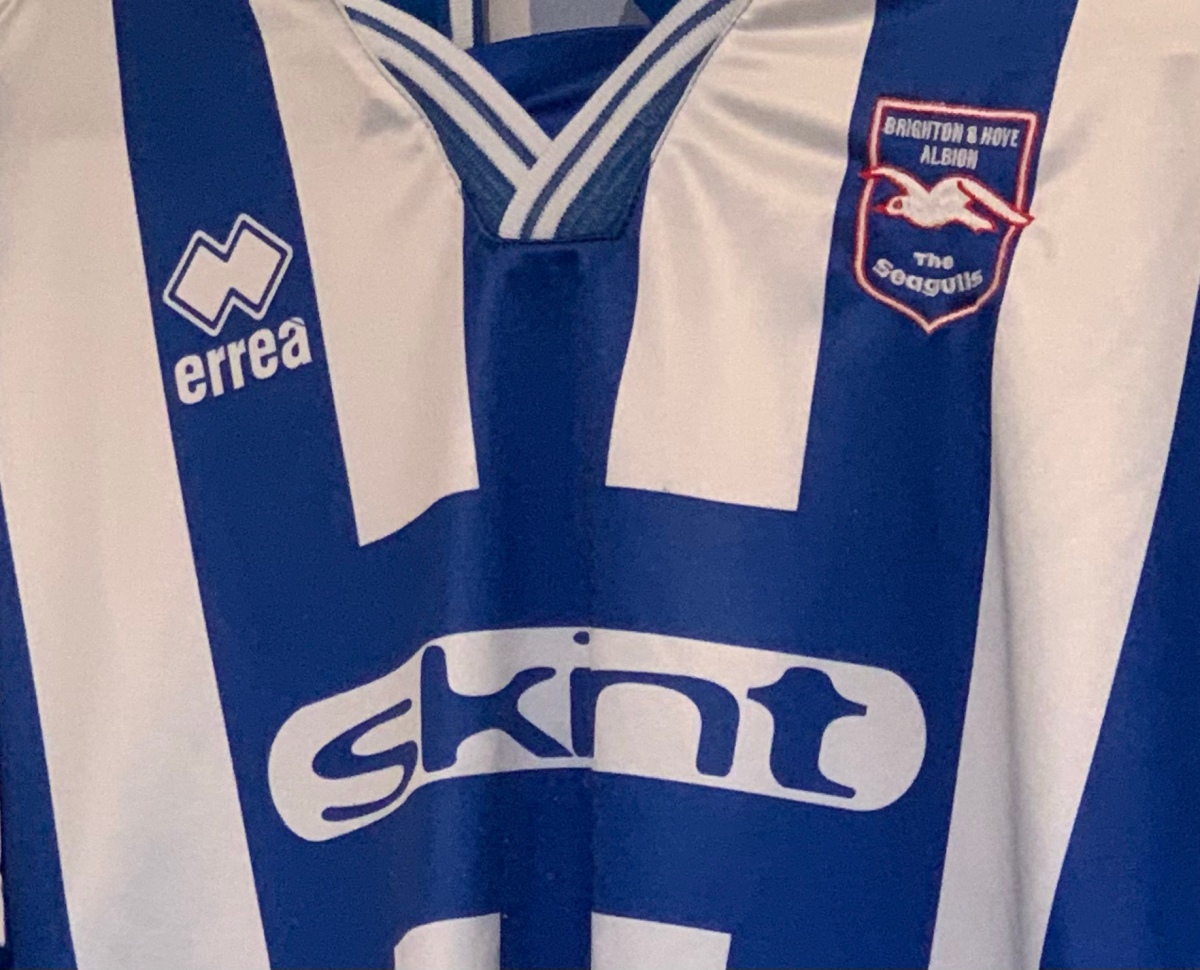 Like many residents of Sussex who grew up in the 90s, I wasn’t particularly enamoured with Albion at first. The club were in the doldrums throughout that decade and so a generation of Sussex based football supporters were lost, at least initially. Particularly for the likes of myself that didn’t have a parent interested in football who would drag them along and force an interest.

However, unlike many of my classmates I did eventually turn to my local club when they moved back to Brighton after a two-year period in exile, to play at the Withdean Stadium in Brighton in 1999. A place that became the club’s home for over a decade.

As such, the first Brighton shirt I owned was the classic home shirt from the 1999-2000 season, the club’s first at the Withdean stadium. Probably most prominently known for the shirt sponsor, Skint records. A Brighton based record label, most notably the home of Fatboy Slim, aka Norman Cook, Brighton resident and Albion fan.

Unlike many of the club’s previously low-profile sponsorship deals, this one caught the eye of the national press as well as local media. In contrast, Albion’s previous deals were a sign of where the club was, at that point in its history.

Local restaurant and long-term club supporter Donatello had stepped in for the previous 1998/99 season when another sponsorship deal had collapsed. It was so last minute that the shirts had to be collected from the supplier on the Thursday before their first outing of the season at the weekend, and so recently printed was the sponsors logo that the boardroom was turned into a makeshift airing cupboard that evening. Desperate times call for desperate measures and these really were desperate times at the club.

Brighton began the 1990s managed by Barry Lloyd, who was initially brought in by his predecessor Alan Mullery, to manage the reserves and youth team. His task was tough, remaining competitive in the Second Division amongst the increased cutting of costs and multiple player sales.

By this point the financial problems were now dominating affairs and the club’s performances on the pitch continued to diminish. So drastic was the cost cutting that around that time The Argus had featured a front-page story stating all the club’s first team professionals were for sale.

Despite the club’s financial limitations, Lloyd began building an exciting, attacking side, focused on a passing style. Selling players like Terry Connor and Dean Saunders for a profit and replacing them with cheaper options likes of Garry Nelson, Mike Small, Clive Walker and John Byrne who formed a relatively successful team, for a short period at least.

Initially this approach was successful and saw Albion get to the Division Two playoff final in 1991, going within just one game of a return to the topflight, but a 3-0 defeat in the final to Notts County was followed by an acute drop down the division.

The reality was Barry Lloyd’s impressive work in the transfer market had just delayed the inevitable fall from grace that would later occur at the Albion after years of financial mismanagement and mounting debts.

Many know the story of the 1996/97 season, but the club had been close to the wall well before the club lost its ground in 1997. In fact, a winding up order received in November 1992 for unpaid HMRC debts was a very close call. After four adjournments, the club was given until 21st April 1993 to find the money to pay the debt and only managed it in the end at the eleventh hour when Barry Lloyd’s wheeling and dealing saw goalkeeper Mark Beeney sold to Leeds United for £350,000, which raised the necessary cash. So close, some fans who attended the game at home to Blackpool the Saturday before Beeney’s sale had feared that it might be one of the club’s last.

With the financial chaos leaving the club desperate and vulnerable, next came the beginning of the infamous Bill Archer regime at the club. Archer was initially brought to the club as a director with the club in the midst of its fight with financial difficulties in 1990. As the club explained at the time, he was brought in for his commercial experience after being credited with Liverpool’s famous Crown Paints shirt sponsorship deal. So, it should come as no surprise that one of the club’s main sponsors during the Archer’s regime was Sandtex, a paint brand which is part of the Crown Paints family and a company which had close relations to his retail chain Focus DIY.

So later on in 1993, after another winding up order from HMRC, came a restructuring of the club’s shareholdings and board of directors. Bill Archer became chairman of the club by securing a 56% stake in a joint bid with Greg Stanley (his fellow owner of Focus DIY) who bought the remaining 44% and took up the post of club president, in a deal publicised as helping to save the club’s finances with some new investment.

In reality rather than a new dawn, this was the beginning of a further downward spiral for the club and a moment of pure opportunism from the DIY tycoons. With the pair invested nothing more in the club as equity than the nominal £100 to purchase the share capital and instead loaned the club hundreds of thousands at high levels of interest in the form of bank loans secured against the club’s only valuable asset, the Goldstone Ground. Rather than safeguarding the club’s financial future, they simply delayed the problem from being dealt with by significantly increasing the club’s debt.

So came the war years at the club, and by the end of the 1996/97 season the club only just staved off the threat of relegation to the non-league on the last day of the season, yet another close shave for the club that decade.

Thankfully prior to the end of this season, after Archer and Stanley had overseen the worsening of the financial mess at the club, they were eventually forced out. But only after prolonged protests from supporters and an endless number of mediation talks with a consortium looking to buy the club and secure its long-term future, headed by Dick Knight, a lifelong Albion fan and former Marketing executive.

The draw away to Hereford had seen the club survive relegation to the non-league by staying above the relegation zone, but there were further threats to it Football League status to come.

The club subsequently faced a vote of expulsion from its fellow Football League clubs for bringing the League into disrepute. But it again survived, by a margin of 47 to 17. Part of this was on the proviso that the club paid the Football League a £500k bond, with repayment conditional upon the club moving back to a permanent home in Brighton within three years. A condition Chairman Dick Knight stated in his autobiography “Mad Man”, that would have bankrupted the club had it not met it.

All the trouble that had come alongside the (not so) civil war between those running the club and those supporting it had dragged the club’s reputation through the gutter. So much so it had to put up a fight just to convince the local council to give it permission to play at Withdean stadium in Brighton, a fight that extended the club’s stay at Gillingham for two full, financially crippling, seasons.

A big part of the turnaround required at the club involved increasing the club’s commercial revenue. When he took over Dick said he was “astonished to discover the club had virtually no revenue from merchandising or commercial activities at all.” A fact particularly true as a result of losing the Goldstone Ground and having to play home games at Gillingham. So, giving the club some form of presence in Brighton during that period in exile was crucial.

They did this by opening a shop in central Brighton on Queens Road in the autumn of 1997, along with a notable kit marketing campaign released later that year to gain more awareness of the new club shop featuring celebrities Louise Redknapp, Jordan and Lenny Henry.

Dick’s attention grabbing, light-hearted and if at times crass marketing was a key part of gaining that public favour. From the Bring Home the Albion campaign (which primarily needed to convince local Withdean residents the club’s fans weren’t a bunch of hooligans about to spoil their local area), the Falmer for All campaign (which included all sorts of attention grabbing schemes including a giant Valentine’s Day card that was sent to then Deputy Prime Minister John Prescott), and even the club’s marketing of its commercial output, Dick’s advertising career continued well after he left the advertising industry.

At the top of the list has to be the Skint shirt sponsorship deal that lasted most of the club’s time at the Withdean stadium. The irony of a football team that was bold enough to be proud to be Skint won a fair few of the club’s critics around. “It’s delicious,” Dick Knight said upon the announcement of the sponsorship. “A club that has gone to the very brink of oblivion will have the cheek, confidence and wit to stride out next season with Skint on its shirt. The deal is typical of the new spirit at the Albion, and we see this as a great way to build an idiosyncratic, unconventional image.”

Along with a change in club crest a couple of season prior, the first Skint shirt was a symbol of the change in fortunes at the club at that time that came with the change in ownership. It became particularly associated with the success of a young Bobby Zamora, the talisman of the double winning title team that would see the club go back to the second tier in just its fourth season back in Brighton.

That’s not to say the difficult times were over, they had just begun a new chapter. A point demonstrated by something Norman Cook said to the Guardian in 2003 “I’ve also put some of my own money into the club. The chairman Dick Knight took me out to lunch, and I asked him whether Bobby Zamora was going to be sold. He looked at me and said: ‘Well if someone puts a lot of money into the club then we can afford to keep him.’ I said that sounds like blackmail and he replied: ‘Call it what you like dear boy but that’s how it is’.”

It’s a story that exemplifies the club’s Skint era. A club that didn’t have much and was often swimming against the tide. But continued to progress, in no small part down to the creativity, determination and ingenuity of Dick Knight.